The COVID-19 crisis has a potentially far-reaching, long-term negative impact on powerless portions of society. Province-2 is one of the provinces that is worse affected by the socio-economic impact of COVID-19, where the vulnerability index developed by WFP showed all the eight districts in Province-2 are worst affected by the socio-economic impact of COVID-19 compared to districts from other Provinces. Consequently, pregnant and lactating women (PLW) & children around the country and in Province-2 are among one of the most vulnerable groups demanding an immediate response from all concerned. The PLW and children are severely affected by the crisis and have caused them to be malnourished. These groups, therefore, are doubly susceptible to compromised health as malnutrition can result in a weak immune system increasing the vulnerability to acquire COVID-19 with a high incidence of stunting & wasting among children. Therefore, it is high time for the stakeholders to ramp up the action and ensure better nutrition among the PLW & children (6-23 months) in resource-constrained settings like that in the districts of Province-2. 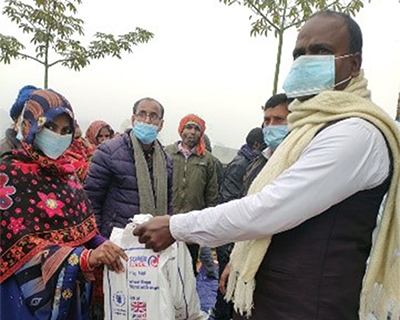 Municipalities for BSFP in Parsa and Bara districts

The main objective of the proposed BSFP program is to contribute for the prevention and reduction of the secondary socio-economic impact of COVID-19 among vulnerable groups through:

The orientation program was initiated formally by Mr. Munilal Baitha – District In charge, Parsa. The DC formally welcomed the BSFP team & shared about the interventions of the organization, along with the thematic areas the organization is working on, with a slight brief on existing policies and code-of-conducts for staff. Further, Mr. Om Thakur – BSFP Coordinator shared with the participants about the program objectives, activities plan, implementation strategy, roles and responsibilities of the team, recording and reporting, demand and supply of logistics, probable risks, and most specifically the safety protocols to be adopted by all during the entire duration of the program.

Since, the BSFP aimed to contribute for the prevention and reduction of the secondary socio-economic impact of COVID-19 among vulnerable groups through – Preventing malnutrition among children 6-23 months of age, and pregnant and lactating women (PLW), and enhancing knowledge of mothers, caretakers and community members on optimal nutrition and feeding; vulnerable and deprived individuals coming from the most marginalized communities such as  Sada, Paswan, Muslim, Patel , Sah, Ram, Sharma , Chaudhary, Jayswal, Kalwar have been benefitted.

Following COVID-19 protocol, BSFP team initiated the task from food transportation to food distribution. On the day of distribution, the team reached at 8:30am in the morning, oriented the BSFP team & divided roles and responsibilities among staffs for registration, temperature measuring, help desk maintenance and management, nutrition counseling corner. The field supervisor helped maintain supportive documents for the financial settlement.

Food transportation: Store Keeper & Assistant Store Keeper have helped load super cereal at sharp 7:00am in the morning. Tarpaulin was used to cover the super cereal properly. At the distribution site staffs did ensure the safe handling and storage.